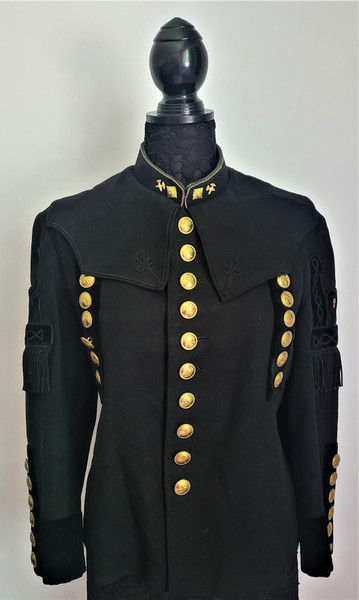 There are few things I like as much as I like German miners items, especially dress tunics!

This dress tunic is incredible, all of the gold buttons featuring the miners symbol are present, the fabric is in exceptional shape and we also have the matching visor and plummed dress cap to go with this tunic.

Search Hanna's Militaria for 'Miner' to find the matches!

As a direct result of the institution of the "Four-Year Plan" for German economic self sufficiency, announced in September 1936, the NSDAP established a National Bureau of Mines, (Bergbau), in October 1936 to oversee mining functions and distribution of essential raw materials. The Bergbau consisted of all previously organized State and Individual Mining Associations and was coordinated by the newly established Berghoheitsverwaltung, (Superior Mine Administration). The parade dress uniforms of the earlier mining associations were standardized with minor modifications including new position insignia. In November 1943 the Bergbau came under control of the Ministry of Armaments and War Production, led by Albert Speer.